The maps I posted the last two days were preliminary to this post. I would like to see two significant changes to the streets in downtown/midtown Sacramento that will make these areas more livable, more walkable, more bikeable, and safer. I am proposing the complete elimination of traffic sewers from downtown/midtown Sacramento. What is a traffic sewer? It is a street designed to move large volumes of vehicles at high speed in and out of work areas during morning and afternoon commute times. In Sacramento, the main work area is the state buildings downtown, though there are certainly other employers and other areas, including midtown. 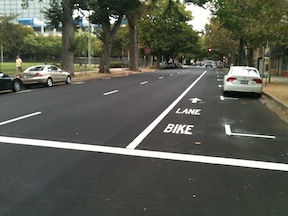 1. Convert all three-lane streets into two-lane streets. The map showing these streets in the downtown/midtown area is linked from my Sac 3-lane Streets post.

These three-lane streets are, of course, also one-way streets. In many cases the lane removed would be used to provide bike lanes or protected bikeways, but in some cases the space might be best used to create wider sidewalks or diagonal parking where additional parking is needed. Though in some cities the three-lane to two-lane conversion is used to create a turning lane, I don’t believe that these are necessary in downtown/midtown, nor do I feel that this is a good investment of right-of-way.

This conversion would remove some traffic capacity, though unfortunately, not as much as one might wish. Studies show only a slight reduction in capacity from this treatment, which is sometimes referred to as a road diet, though I like the term rightsizing.

Why? All multi-lane streets are a danger to pedestrians. The multi-lane threat hazard occurs when one vehicle in one lane yield to a pedestrian, while vehicles on one or more of the other lanes do not. Most of the pedestrians deaths in the Sacramento area, and probably nationally, occur in just this situation. Reducing lanes from three to two cuts this danger in half. Of course any such danger is too much danger, which leads to the second recommendation. On a three-lane, one-way street, there is no friction at all to slow the middle lane, and so that lane almost inevitably travels at well over the speed limit, and this pulls up the speed of the adjacent lanes until all lanes are moving well over the speed limit. On a two-lane, one-way street, both lanes experience friction on the outside, causing them to move more slowly, perhaps as low as the posted speed limit.

All the recent conversions of three-lane to two-lane streets have occurred as part of a repaving project, and of course it makes sense to make all improvements at the same time, however, re-striping of streets without resurfacing is quite practical and not very expensive. Since this conversion is not expensive, I would suggest that it can all be accomplished within two years, for all 26 miles of the three-lane streets.

2. Convert all one-way streets to two-way streets. The map showing these streets in the downtown/midtown area is linked from my Sac 1-way Streets post.

Why? One-way streets encourage speeding for the same reason as do three-lane streets. A two-way street, however, has friction along both sides of the lane, from parked cars, bicycle lanes, or curbs on one side, and from opposing traffic on the other side, and speeding can be greatly reduced or even eliminated. Two-lane streets also eliminate the multi-lane threat hazard. I’m willing to speculate that if all streets in downtown/midtown were two-way, two-lane streets, we would have no pedestrian fatalities and many fewer pedestrian injuries.

The conversion from one-way to two-way is not inexpensive. In some cases, stop signs need to be added. At signalized intersections, the mast arm and signals would either need to be doubled or, in a few cases, moved, and traffic signals are not cheap. However, I also believe that there is an excess of both signals and stop signs in downtown/midtown. These now exist for two reasons: 1) in a (failed) attempt to slow traffic, and 2) to allow traffic from side streets to cross the busy streets. Stop signs and signals do not, however, significantly slow traffic. Leaving the stop sign or signal, most drivers immediately accelerate back to their over-the-speed-limit normal. Once all streets are converted to two-way, two-lane streets, this will naturally slow traffic, making intersection control less necessary. Yield signs would replace many of the existing stop signs. And since none of the streets are now high-speed traffic sewers, it will be much easier for side-street traffic to find gaps for crossing.

Since this conversion is more expensive, I would suggest that it might take five years, for all 26 miles of the three-lane streets. There are an additional seven miles of streets which are one-way but are not also three-lane.

Of course it makes no sense to convert from three-lane to two-lane, and then shortly after convert from one-way to two-way, but the work can be scheduled so that both are accomplished at the same time.