Here is the second map generated from American Community Survey data, this one showing average commute times by zip code. Nothing surprising here, the central city still compares well with other areas of the county, but there are some interesting patterns in the Sacramento County map (commute time), such as the northeast county in which I’m guessing people are commuting to Roseville rather than downtown, and therefore have reasonable commute times. 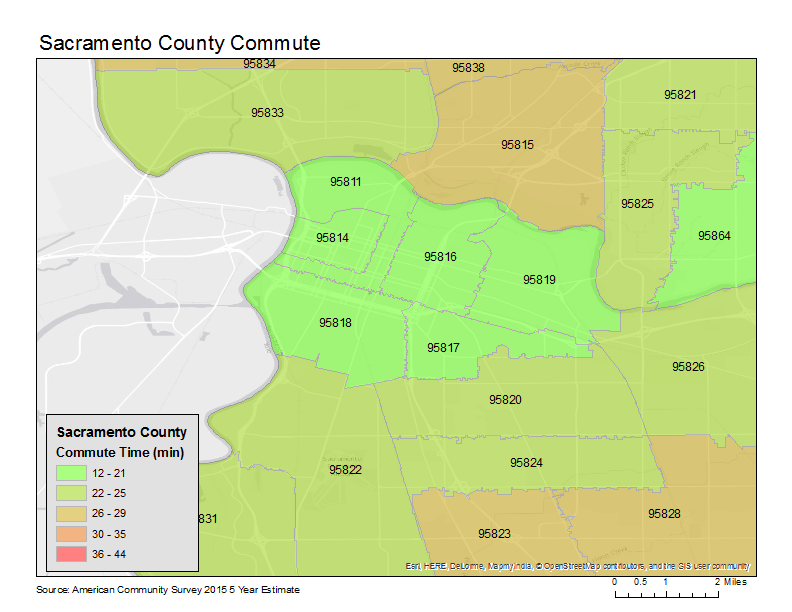 If I were looking at commute times for surrounding counties, I suspect the average commute times would be significantly longer, since many people are commuting into employment centers such as downtown, Roseville, and Folsom. I have to admit that my own commute is long, 30 minutes to 90 minutes depending on where I’m working in the eastern suburbs. But I’d much rather be on a bike for 90 minutes than in a car for 20 minutes. I use transit at times, but for most trips it is either the same or longer to my work destination, so I use it mostly on horrible weather days and when I need to get work done on the way there or the way home.

Since this map doesn’t require much explanation, I’ll say more about census data. The American Community Survey has some very complex questions, such as whether you departed for work between 6:00AM and 6:30AM, but it can’t seem to find the bandwidth for some simple but very useful questions such as “Is your commute multi-modal? What percentage?” A person can only answer in one category: car/truck/van, bicycling, walking, transit, or other. If a trip is 51% transit and 49% bicycling, it shows up as an entirely transit trip. If a person drives 15 minutes to a parking garage and then walks 10 minutes to work, it shows up as an entirely driving trip. A number of people have suggested that this single mode constraint over-emphasizes the mode share for driving and therefore underemphasizes walking, bicycling and transit.

I will be looking at the National Household Travel Survey, last completed in 2009, to see how it compares to the American Community Survey. There is also a California Household Travel Survey, which looked at things is a much more detailed manner, but did not provide anywhere near the coverage of a census, sampling only typical parts of the state in detail.