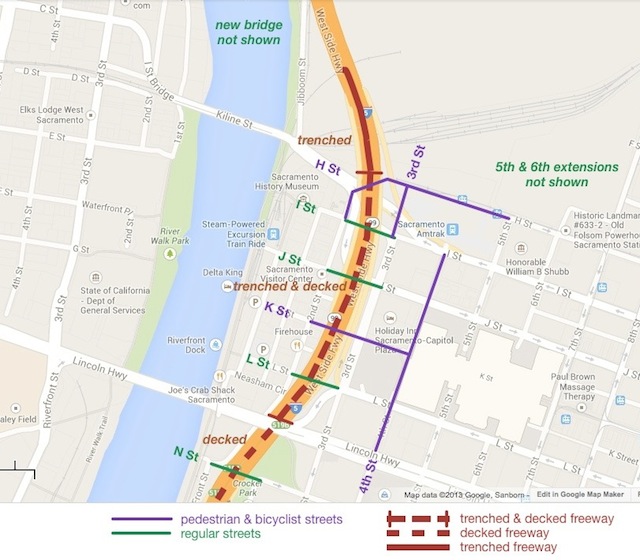 Interstate 5 is a Berlin Wall through the heart of Sacramento, severing the connections between downtown and Old Sacramento. It was a product of a time when cars ruled the world, and no other values were of importance. Those times are over, and now it is time to tear down the wall and re-unify Sacramento. A map showing the general idea follows the break, but here are the highlights:

This will certainly not be my last post on these ideas, and I will explore the why and how of the pedestrian and bicyclist streets shown.

Note on terms: “cut and cover” is often used for underground transit and rail lines, but the term seems less commonly used for freeways, so I’ve used “trench and deck”; “the big dig” is also often used, after the project in Boston, which went way over budget and took years longer than intended, but apparently has had a very positive affect on the city

South of Capitol Mall, the freeway is already trenched, but there is only one street crossing, O Street. The city has a funded project to improve O Street and Capitol Mall, but the project to create a new bridge for N Street is not funded, and the city has apparently given up on the original plan to deck the freeway between O Street and Capitol Mall. R Street is a pedestrian and bicyclist access point, on the old railroad bridge.

My proposal for this section is to again consider decking of the freeway. Decking is expensive, particularly for the wide expanse of lanes, but the value of a reconnected streets grid and developable land is very valuable.

North of Capitol Mall, the freeway climbs to an elevated level, in fact super-elevated so that various on and off ramps can fit underneath it, and continues this way until north of Richards Blvd. Neither the city nor Caltrans has any plans for changing or improving this section, so far as I know.

My proposal is to trench and then deck Interstate 5 from Capitol Mall to north of the main railroad tracks in the railyards area. With the freeway below ground, the surface would then be open for reconnecting the street grid and developing the land. Tear down of the existing freeway, then trenching, then decking over, would be very expensive. But again, not expensive compared to the value to be gained.

The decking of the entire section between O Street and I Street would create six square blocks of developable property. I imagine that some of this would be set aside a park or public plaza space, but most of it would be available for development.

North of I Street, the freeway would be trenched in order to go under the railroad tracks, but it need not be decked. Between the tracks and Richards Blvd the freeway could come back up to elevation. The location and configuration of the new bridge over the Sacramento River, probably connecting C Street in West Sacramento with Railyards Blvd in Sacramento, could affect where and how the freeway comes up again.

How to pay for it?

Most people will react that this is simply too expensive to even consider. I am not claiming that it will be other than very expensive. But I think the opportunity cost of leaving Old Sacramento severed from downtown, not only inaccessible but invisible, is very high. And the opportunity cost of leaving what should be developable land devoted solely to freeway is also very high. The return on investment of development is not too hard to quantify, and it is always positive so long as the development is well planned and doesn’t depend on subsidies to be successful. The return on investment of freeways is much harder to quantify, but I’d suggest that it is almost always negative. The cost of the freeway is not paid back by economic activity, and I’d even suggest that it is negative, because it encourages sprawl development which is always a negative economic activity, highly subsidized in order to be successful. And by encouraging people to spend a high percentage of their income on transportation and to lose the opportunity cost of time spent commuting, it encourages individuals and families to make poor economic decisions. But, still, the project will be expensive.

Here is how I’d allocate the cost:

2 thoughts on “trenching and decking Interstate 5”