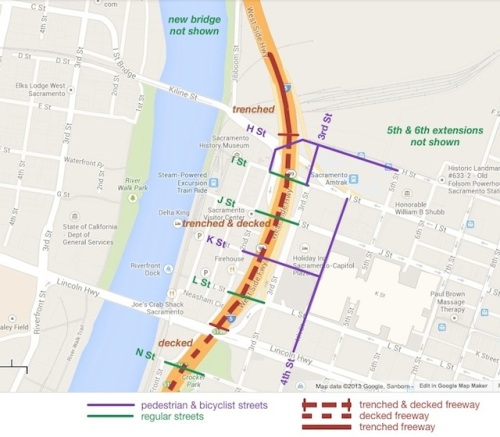 Interstate 5 is a Berlin Wall through the heart of Sacramento, severing the connections between downtown and Old Sacramento. It was a product of a time when cars ruled the world, and no other values were of importance. Those times are over, and now it is time to tear down the wall and re-unify Sacramento. A map showing the general idea follows the break, but here are the highlights:

This will certainly not be my last post on these ideas, and I will explore the why and how of the pedestrian and bicyclist streets shown.

Note on terms: “cut and cover” is often used for underground transit and rail lines, but the term seems less commonly used for freeways, so I’ve used “trench and deck”; “the big dig” is also often used, after the project in Boston, which went way over budget and took years longer than intended, but apparently has had a very positive affect on the city

END_OF_DOCUMENT_TOKEN_TO_BE_REPLACED 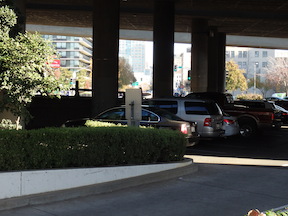 Traffic circulation, for everyone, is handicapped or prevented by an incomplete grid system in downtown and midtown Sacramento. Three recent posts have addressed this issue, I’m thinking about several more, and several posts over the last year were also on the same topic. So I created a new category for the Getting Around Sacramento blog, re-gridding Sacramento.

Re-gridding is an awkward phrase, but I haven’t come up with a better one yet, so I’ll use it for now.

END_OF_DOCUMENT_TOKEN_TO_BE_REPLACED

William Burg started a wonderful conversation on Facebook about removing Business 80 from B Street to Hwy 50, returning the traffic to surface streets. The post is now up to 115 comments, and still going after two weeks. I believe that you have to be a member of Facebook to view this thread, but don’t need to be friends with William Burg (though you should). I agree with Jared that this topic should be amplified for Sacramento Press.

Some people think that this is crazy thinking, it will never happen. I think it will. Why? Not because it is a good idea, though it is, but because we will not be able to continue to keep these freeways open and in decent condition with future transportation funding. Caltrans and others have just spent or are spending $202 million on Hwy 50, basically just to keep in it usable condition. Not to improve it in any significant way, but just to keep it working. Where is the money going to come from to maintain Hwy 50, Interstate 80, Interstate 5, and Business 80 (Capital City Expressway)?