In today’s SacBee, an article on the City of Sacramento’s removal of crosswalks (Why Sacramento erased 23 crosswalks, including one where a grandmother died after removal), which has contributed to at least one fatality, had the following information from Ryan Moore, the City Traffic Engineer.

“To send the message via crosswalk that this is a good place to cross the road is a false message,” Moore said of the Oregon Drive intersection. “Our standards dictated that we remove the crosswalk or build safety enhancements.” The city would have kept the crosswalk marking in place, he said, if it would have been able to install a traffic light there. But the money – in the $500,00 plus range wasn’t available. Instead, traffic engineers hope that by removing some crosswalks, pedestrians will instinctively choose to cross at a safer, nearby intersection, Moore said.

This is definitely the engineer perspective that says lives don’t matter as long as policy was being followed, and the windshield perspective that it is OK to make pedestrians walk out of their way so long as drivers are not inconvenienced. 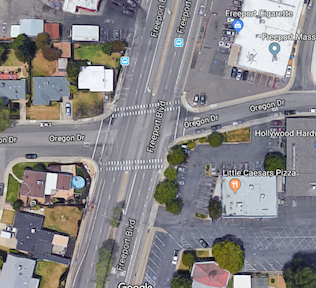 As you can see to the right, at the intersection of Freeport and Oregon, there are residences to the west and businesses to the right. There are signalized crosswalks about 700 feet to the north and about 700 feet to the south, but walking to either of these adds a one-quarter mile walk. Is this reasonable or not? It could be argued either way, but to discount it as Mr. Moore did demonstrates bias against pedestrians. The Google Map photo is from before the removal of the crosswalk.

The suggestion that nearby intersections are safer is also questionable. At the intersections of arterial roads, which Freeport and Fruitridge to the south are, drivers routinely fail to yield to pedestrians in the crosswalk on right turns. That is in fact why many walkers prefer to cross away from major intersections.

Common estimates of the expense of a HAWK signal (High-intensity Activated crossWalK) are $100,000, not $500,000. $500,000 is the cost of a fully signalized intersection. So Mr. Moore’s $500,000 number is a straw man meant to deflect criticism by saying the solution is more expensive than it really is.

There are solutions to this particular problem, and to the removal of crosswalks in general:

Anything short of these actions makes the city engineers both morally and legally responsible for any fatalities or severe injuries that occur at the site of a removed crosswalk.

2 thoughts on “removal of crosswalks”