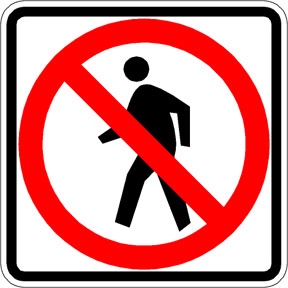 To complete the story about crosswalks, the locations where crossing is prohibited must also largely be removed. These locations are marked with the ‘no crossing’ sign at right (MUTCD R9-3a). Some of these locations probably never had crosswalks, some had them but were removed when the street was ‘upgraded’. A few of these locations cannot be made safe without complete reconstruction of the street. Freeway on-ramps and off-ramps, of which Sacramento has too many because it has too many freeways and too many freeways designed around commuting instead of interstate commerce, are particularly problematic. However, most locations indicate a clear intent by traffic engineers to prioritize the movement and speed of motor vehicles over all other considerations, including safety. This bias must be ended.

Here are the solutions:

Though I am picking on the City of Sacramento here, these prohibited crossings are found in every city in the region, and in abundance in unincorporated areas. All should receive the same treatment.

One thought on “and crossing prohibitions”