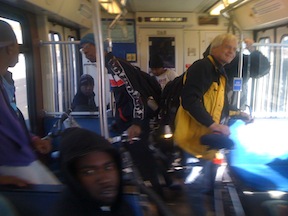 Bikes and light rail are a natural complement to each other. Light rail covers the longer distances quickly, while bikes get you from your origin and to your destination, directly or via connecting bus service. I’ll post about buses later.

Bikes can be taken on all Sacramento RT Light Rail trains, without time restrictions. However, there is insufficient capacity on light rail for bicyclists, for two reasons:
1. The restriction on the number of bicycles per car of four does not reflect the current demand for bicycle space. This is a relict of a time when few bicyclists used light rail, and must be modified.
2. Passengers without bicycles occupy the end spots of the cars, seemingly in preference, precluding use by bicyclists. These bicyclists then cram their bikes into other spaces and inconvenience other passengers.

All of the cars have signs about disabled use of one side of the end of the each car: “By law, this area is reserved for the use of elderly and disabled, when at the front of the train. Please vacate for their use.” The other side of the end has: “Four bikes allowed on-board each light rail train, two in front and two in rear, except at front of first car. On one-car trains, two bikes allowed at rear only.” By the way, I’ve never seen a train operating with one car. The newer 200 series cars have one bike hook on each side, at each end, for a total of four per car, which matches the posted capacity. Some of the older 100 series cars have hooks. Though the hooks are not hard to use, they do require lifting the bike vertically, which not all bike riders are capable of doing.

Solutions
1. One side at both ends of the car should be modified so that it is for bicycle use only. This quadrant should have the seats removed to preclude use by other non-bike passengers, and the window removed so that a set of easy-to-use bicycle racks can be installed. Hanging racks, similar to those used on the Capitol Corridor, or a side rail with bungee cords, similar to those used on Caltrain, could be installed (see Capitol Corridor and Caltrain photos below). With proper placement, these racks would hold at least three bikes in the space that now holds only one. This would provide for a minimum of three bikes per quadrant, or six bikes per car.
2. The other side would still be for priority use by disabled and elderly, but available for bike use at other times. At times when there is no disabled or elderly use, this would provide a minimum of twelve bikes per car, but at all times there would be at least six as provided by the bike quadrants.
3. New signing would be installed to indicate that one side is for exclusive bike use, while the other side is for priority disabled and elderly use, but available for bike use.
4. People also use the very ends of the cars for bikes, where the stair wells and driver door are, with one to three able to fit in this area. However, on busy trains, these bikes end up slowing boarding and debarking for all passengers. This end area should probably be restricted to one bike, with appropriate signing. So long as the additional capacity is added as above, this would not be a significant restriction.

The experience of the Capitol Corridor and Caltrain, as well as transit systems all over the world, is that when bicycle capacity is provided, there is a concomitant increase in fare income and in the satisfaction of passengers.

When I’m on light rail with my folding bike, I often will fold it and use a regular seat in order to keep open the end areas for people with regular bikes.

It is difficult for many people to get up and down the light rail car stairs with bikes. Though we often think of bicyclists as being more able bodied than the average citizen, there are quite a number of people biking and using light rail who have significant physical limitations, and I see them struggle with their bikes. I don’t know of a solution, as this is an inherent limitation of the street-boarding design used on this light rail system. It is a joy to just walk or roll a bike from the platform to the car, as can be done with BART, but BART is a different kind of system that runs at grade separation everywhere, allowing level boarding. I do offer to help people get their bikes on and off, and so do other bicyclists, but with our own bikes not properly stored, it is hard to leave them to help.

I’ll have more to say in the future about getting out of Sacramento on the train, including how to transfer to bay area transit systems.

One thought on “Bikes on RT Light Rail”