Chuck Marohn, President of the Strong Towns organization, will be in the Sacramento area this Thursday (June 16). He is speaking in Citrus Heights, 6:00PM to 7:30PM, and it appears he is also presenting to the SACOG Board at a workshop, item 14 (immediately following consideration of the proposed transportation sales tax measure side agreement).

This conjunction seems appropriate, since Strong Towns has just released its five campaigns that are the core of its new strategic plan:

So, how does the transportation sales tax measure measure up?

I am a founding member of Strong Towns, and the organization has influenced my thinking about transportation and housing more than any other source. I don’t agree with everything, but I do agree with most, and it is these goals that I work to implement in the city, county, and region.

As promised, a different map of the City of Sacramento showing low income high minority (LIHM) areas, below and in pdf. The light green = low income high minority, is probably the most significant category. There are similarities to the median household income map posted earlier, but they are not identical. It is not that either is right or wrong, just different measures.

This dataset is the Environmental Justice or LIHM developed by SACOG in 2020, for use in their MTP/SCS development process and other uses. This dataset used block groups, the smallest of the census areas, rather than census tracts, which is why the areas on this map do not necessarily match the census tract boundaries on the MHI map. The summary description is:

Environmental Justice areas as of 2020. Created with various factors related to environmental impact of the Sacramento region.

SACOG, with the assistance of the SACOG Equity Working Group, identified 2020 EJ areas as census block group level concentrations of low income, and/or high minority and/or qualification of an “other vulnerability” and/or within the CalEnviroScreen 3.0 identified areas. The other vulnerabilities take into consideration concentrations of: older adults aged 75 or more, linguistically isolated households, single parent households with children under the age of 18, low educational attainment, severely housing cost burdened households, and persons with disabilities.

This is consistent with SACOG’s 2020 MTP/SCS adopted plan. This feature has identified 548 boundaries as Environmental Justice areas for the SACOG region as of August 2021.

The Strategic Growth Council has awarded $808M in grants for affordable housing in the sixth round of the Affordable Housing and Sustainable Communities program.

Streetsblog Cal covered one of the two in the Sacramento region:

The other project is On Broadway Apartments in Sacramento at Broadway and 19th St, with 138 units of income restricted housing. This is two blocks from the Broadway light rail station and along SacRT bus route 51. I could not find any articles that are not firewalled, but here are two you may want to read: https://www.sacbee.com/news/local/article242715176.html and https://www.bizjournals.com/sacramento/news/2020/05/14/broadway-proposal-would-add-150-affordable-apartme.html.

The Sacramento Tweed group is hosting the annual Tweed Ride on Saturday, December 4, starting at 12:00 noon. The ride is “Winter Wonderland Ride and Picnic”. It meets at WAL Public Market at 1104 R St, at 11:30AM, and rolls about at noon. It is a ‘bring your own picnic’ event. The picnic occurs in a local park. There is sometimes an unofficial after-event visit to a drinking establishment.

And a photo from the 2014 Sacramento Tweed Ride picnic.

I am a strong supporter of Strong Towns, and think their analyses of financial and transportation issues is almost always spot on. However, I think there is a blind spot when it comes to speed limits. In a recent broadcast, Chuck Marohn addresses a question from a member about whether it is better to change speed limits street by street, or all at once. In response, Chuck launches into his view that only design changes can control speed. This is the first question in the broadcast, so you can listen from the beginning.

Here is my response:

I have to push back against Chuck’s take on speed limits. Nothing he says is incorrect, but there is an underlying ideology that rejects changing speed limits without changing design, as any part of a solution.

I am absolutely in favor of roadways designed to self-enforce lower speeds. I have supported and helped design projects to do exactly that. And at no time have I ever felt that was enough. I think we need to use every action at our disposal (except biased traffic enforcement) to lower speeds. Now, not at some time in the future.

Overall, the plan is great, and when someday implemented, will result in a much safer and livable Stockton Blvd. The plan addresses major concerns raised by the community, including safer and more frequent crossings, better lighting, more trees, more effective transit service, and others. However…

The City of Sacramento Active Transportation Commission will consider the plan this evening (2021-03-18). I apologize for not posting this in time for you to consider my suggestions, and relay them to the commission, if you agree.

Added info: There was a discussion about the prioritization of different travel modes during the SacATC meeting this evening. It reminded me of one of my favorite graphics about transportation modes, from Chicago Department of Transportation. I think this is the right answer for Stockton Blvd, and for nearly every other roadway.

The City of Sacramento recently release a new 311 app. I have been using this app (iOS version), mostly to report issues with construction signing. The app is broken!

What are the issues?

I saw a cool graphic of the flow of JUMP bike share bikes in San Francisco, and thought is would be interesting to do the same for Sacramento. The effect is not so dramatic, but it is interesting. I have zeroed in on the central city, which of course only tells part of the story, but this is the level at which bike and hub icons show, whereas the next zoom out only shows them as dots. I’d like to do this for a weekday as well, but probably won’t have the chance for several weeks, as I’m out of town.

The first one is Saturday, at a few points in time, the second one is Sunday, at three hour intervals. Maybe like watching paint dry, maybe better.

The Breeze Bike Share in Santa Monica uses the same Social Bicycles (SoBi) bikes that the Tower Bridge Preview in Sacramento does. On a recent four day visit to Santa Monica, I used the system quite a bit, both for transportation and to compare systems. Here is my take: 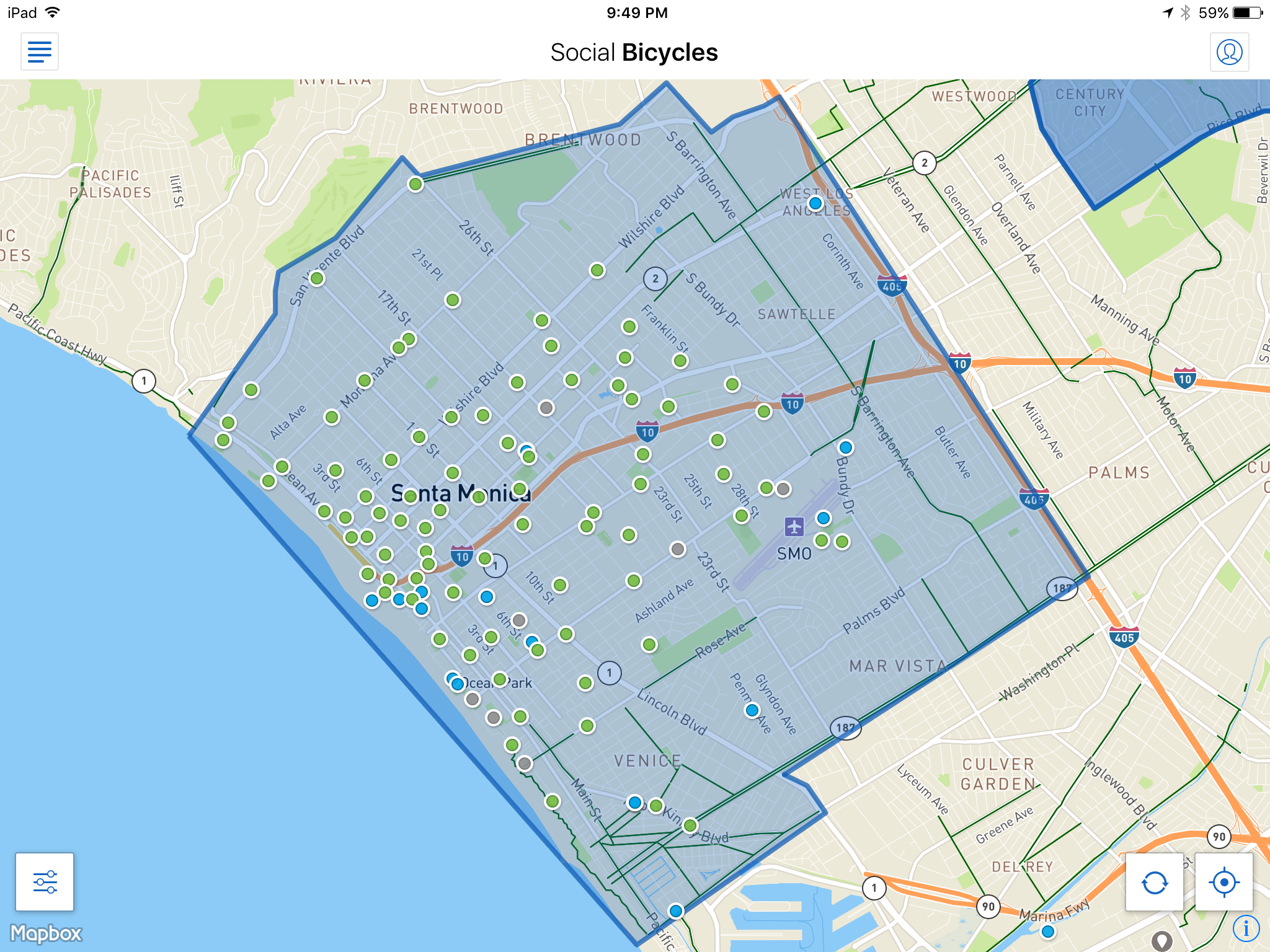 Strong Towns had a post yesterday “Why greenspace is different from a park” that got me thinking about parks and green spaces in Sacramento. As a commenter said, it is the quality and use of the land, and the relationship to space around it, that is most important, not the park or greenspace binary.

Two dead parks come immediately to mind, Winn Park in midtown (P & Q, 27th & 28th), and Crocker Park (N & O, 2nd & 3rd). How are they dead? Very few people ever use them, certainly not enough to make the space feel used and safe, as the blog post points out is so important. In Winn, there is finally a small playground, but overall it does not make the park feel any less abandoned. Crocker Park as nothing to do. Yes, both places have trees and grass, but those thing are not in short supply in Sacramento. Several other square block parks feel alive.

Roosevelt Park (P & Q, 9th & 10th) has sports and a nearly continuous pick-up basketball game going on. Fremont Park has a larger playground, a fountain in the summer, benches, and events such as Chalk It Up. Probably most importantly, it has both residences and business on adjacent streets. The park is not the only reason to go there. Cesar Chavez Park (I & J, 9th & 10th) is probably the busiest small park in the region. It is a homeless daytime retreat, has a lot of events, now has a cafe again, and is surrounded by business and government, particularly the library. Many reasons to go there. There are several other one-block parks in downtown and midtown that I’m less familiar with.

Crocker Art Museum is working up plans to activate Crocker Park by integrating it better with the museum. I think they’ll do a good job, though funding may slow the solutions. The city is finally talking about activating Winn Park, but I don’t think there is a plan yet. I’m sure some people in the neighborhood would be horrified, but what Winn needs is not just a park with more things to do, but more facing retail business and higher density housing. There is a bit, such as Lou’s Sushi, but it needs more. More things to do not just in the park, but around the park.

The Strong Towns post also talks about green spaces, those areas left to grass or sometimes more interesting vegetation, but not really serving any purpose. In Sacramento, there are green spaces along some of the freeways. This is dead land, and few people want to even be there, but as the commenter points out, it can be used to handle stormwater and to filter air pollution, if designed properly. In newer subdivisions, there is often green space along the main roads. How this is of benefit escapes me. Those people whose back fences face a busy street have and will alway have lower property values, and no amount of non-native plants is going to change that. Front yard greenspaces are a horror in the suburbs, perhaps the thing most responsible for making suburbs the low value communities they are. People retreating into a set back house with a moat of grass is the problem, not the solution, to livable and responsible communities. The inner ring, older suburbs have this issue to some degree, but the setbacks are much less, and the lack of snout houses (those showing their very best two, three, four cars garages to the street) makes it acceptable. Sacramento downtown and midtown of course have a lot of temporary green space, places where housing was torn down (some which could have been repurposed or rehabilitated, and some not) and the planned replacement never built. I suppose it is good to have some land “banked” in this way, but we have far too much.

And then there is Capitol Mall. Vast grass in between tall buildings, and never used by anyone except for a few major events each year. I suppose that someone thought a grand entrance to Sacramento was needed, along the lines of a city of skyscrapers and parks envisioned by Le Curbusier. But it is pretty much useless. It is not a park in any sense of the word. There have been suggestions over the years of how to fix this, including Rob Turner in Sactown Magazine: Boulevard of Broken Dreams. But solutions will be expensive and contentious.

Rain swales are another type of greenspace which I have apparently not written about, but will. There ar several close to where I live.