In addition to the leading pedestrian interval recently covered, three other pedestrian safety countermeasures are given prominence (among a long list of potential measures with smaller but not insignificant benefit):

Medians and Pedestrian Crossing Islands in Urban and Suburban Areas: These medians provide a safe space for pedestrians to wait while part way across the intersection, and simplify the crossing by making so the walker only has to look at one traffic direction at a time. They are used both in mid-block and intersection settings. The photo is of a pedestrian island at Folsom and 48th in Sacramento. This is a location with frequent crossings, with popular businesses on the north and south side of Folsom. And with a popular bar on the north side, the importance of safe crossing is increased. 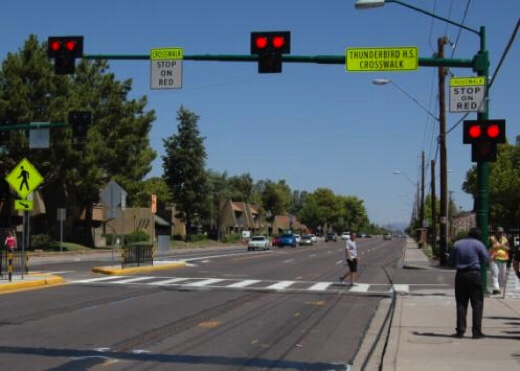 Pedestrian Hybrid Beacon: This is a specialized signal for mid-block pedestrian crossings that grabs the attention of drivers with a sequence of changing signal patterns that eventually goes to full stop. These are also known as HAWK signals (High intensity Activated crossWalK), invented in Arizona. I often hear complaints that these signals are confusing to drivers, but to me, that is exactly the point, it grabs their attention. Though I’ve seen these installed at intersections, this is a mis-application; they are designed for mid-block crossings. These signals are expensive, about 20% of the cost of a fully signalized intersection. The Rectangular Rapid Flashing Beacon (RRFB) is a much simpler and much less expensive alternative, but limited to lower traffic volume and lower speeds than the hybrid beacon.

Road Diet: A road diet reallocates roadway width from regular motor vehicles lanes (called general purpose lanes) to more constructive use such as wider sidewalks, bike lanes or separated bikeways, transit lanes, and sometimes parking – where it is really needed and calms traffic). The simplest to implement is the conversion of parallel parking to diagonal parking on overly wide streets, such as has been done a number of places in Sacramento central city. More complicated reallocations are often called ‘Complete Streets,’ though complete streets are not well defined, and adding sidewalks and bike lanes to 45 mph posted (55 mph actual) arterials with infrequent safe crossings does not encourage anyone to walk or bike and may be a waste of money. But in urban areas where the capacity of multi-lane streets is not needed, or needed for only a very small part of the day, a road diet may create a safer and walkable environment.