In 2005, the Federal Highway Administration (FHWA) published Safety Effects of Marked Versus Unmarked Crosswalks at Uncontrolled Locations. The authors were Charles V. Zegeer, J. Richard Stewart, Herman H. Huang, Peter A. Lagerwey, John Feaganes, and B.J. Campbell, but the research paper is usually referred to as ‘the Zegeer report.’ 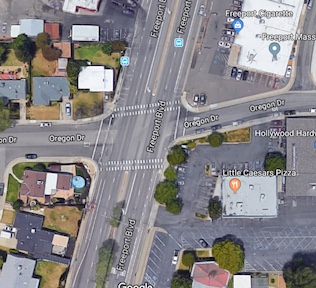 This is the research that Ryan Moore was referring to in the crosswalk removal meeting when he said that the city was following federal guidelines that required them to remove the crosswalk at Freeport and Oregon, though he did not call out Zegeer by name. Twenty-three crosswalks were removed in total, though we still don’t know where all of them are, and the city won’t provide that information.

As you would imagine, research reports contain a lot of text and figures and tables, but a key finding is that on multi-lane roads (more than one lane in a direction), with traffic volumes over 12K ADT, marked crosswalks had a somewhat higher crash rate than unmarked crosswalks. There is always an unmarked crosswalk at intersections unless there is specific signing to prohibiting crossing. It is this finding that traffic engineers have used to not install, or to remove, crosswalks on arterial roads all over the US. They don’t read beyond that.

Most importantly, Charles Zegeer, the lead author, said this about the key table in the report:

“This table should never be used to remove crosswalks. That will not solve the safety problem. Use this table to make crosswalks safe.” – Charlie Zegeer

I was on a webinar in which he said that he was horrified by the tendency of traffic engineers to use his research to justify crosswalk removal, and he strongly implied that this was professional malfeasance.

I believe that the city removed the crosswalk because they looked at the intersection and decided that removal was preferable to all other options. This is the ‘cars first’ attitude that contributes to the death of almost 6000 pedestrians a year. It preferences the convenience of people driving though a neighborhood over the safety of people in the neighborhood. This is not acceptable to me, and I doubt it is acceptable to the neighborhood around the removed crosswalk. The city needs to rethink its entire approach to pedestrian safety. Having a Vision Zero Action Plan will do no good if traffic engineers continue to make the wrong choices.