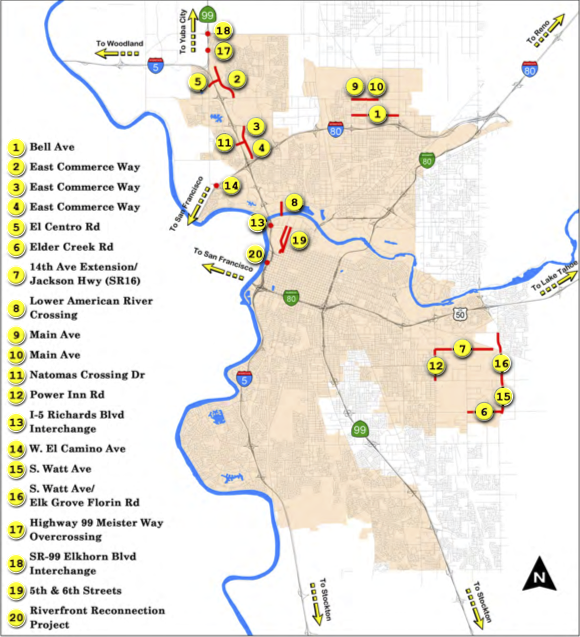 The City of Sacramento is working on a Transportation Development Impact Fee (TDIF) for the entire city, and with somewhat different requirements for subareas including downtown, river district, and North Natomas. The Sacramento Bee clued me into the proposal with Sacramento asks developers to open wallets to keep city streets from clogging (SacBee 2016-12-08). My initial guess was that this is in response to the failure of Measure B, but this proposal has been worked on since at least August, so that is not the case. The city has a webpage on development impact fees, with two documents specifically about the transportation DIF. I have not had the time to delve into the details, nor do I have any expertise in this area, so these are my initial thoughts.

I support the idea of developer impact fees for transportation. Our transportation system should be funded by general taxes (to some degree), user fees (mostly, such as gas tax, mileage tax, congestion fees, etc.), and fees on beneficiaries, such as this development impact fee. The proposal’s reduction in fees for transit oriented or transit proximity development encourages infill development. I’d argue that greenfield development actually impacts the entire network in a much more significant way than suggested by the fees, so these fees should be higher. The proposal would be better than what we have now, which is an almost entire subsidy of all development-generated transportation costs.

However, I see some major issues with the proposal:

So, how could this proposal be improved?

These are steps being taken by many cities in the United States to not only mitigate the impact of development, but to use infill development as a tool for achieving overall livability goals. Sacramento has taken some small steps in this direction, such as removing parking minimums from the central city, but it is time to take some big steps, and the TDIF is an excellent opportunity.