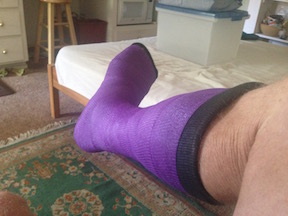 Getting around… with a knee scooter

I fractured a bone in my right foot on July 7 while backpacking along the Pacific Crest Trail in the Granite Chief Wilderness. I initially thought it was a tendon problem, because I’d had some discomfort with the tendon before, however, in stepping on the outside edge of my foot on a rock, the pain level increased manifold. I walked out on it. On Friday, I went into the doctor, got an x-ray, and now have a lower leg cast. What does this have to do with transportation? Well, I’m now getting around with a knee scooter, rather than walking or bicycling.

It has been interesting, and here is my take on it so far. The knee scooter has small wheels, about eight inches, so it is less stable than a bicycle, or a wheelchair. Because it is somewhat unstable, I use a lot of energy maintaining balance. Though I’ve noticed, now that I’m paying more attention to people using wheelchairs, that the unpowered ones are not all that stable either. But it does move along quickly, faster than walking though not as fast as bicycling.

I’ve been to the store (two blocks, six blocks, and seventeen blocks), the library, two farmers markets, to have a beer, and some just “walking” around. I’ve used buses and light rail, more than I normally do when I’m commuting on my bike. I’ve made one trip outside of midtown/downtown so far, out to Rancho Cordova to pick up the knee scooter. I went out on crutches, and back on the scooter, using light rail, bus, and “walking.”

I’m paying much more attention to sidewalk quality and mobility challenges than I normally do, and here are some comments:

As a result of these experiences, I am so thankful that I live in midtown. If I lived in the suburbs, I would be having to depend upon friends or taxis to get me everywhere I needed to go. My independent mobility would be zero.

I strongly feel that the livability of a place includes the ability of anyone to get where they need to go, by whatever means they have to or choose to. Midtown/downtown meets this component of livability. The suburbs fail. I will have much more empathy now for those individuals with disabilities that I see trying to maneuver the pedestrian-hostile and car-friendly suburbs. Why has the county created, and why do they allow to exist, an environment that activity discourages some citizens from living a regular life? The cities of Citrus Heights and Rancho Cordova, which were carved out of the county, have made efforts to correct these problems, but they are still largely stuck with what the county passed on. I know in the case of Citrus Heights, the county still gets all the property tax collected in the city, but spends zero on fixing the problems they created, while the city gets no property tax but has to fix the problems. I had always wondered why the residents of Citrus Heights had made such a deal, to forgo property taxes for 15 years, but I now come to understand that it is worth almost anything to get out from under the county.