There has been a discussion on the Association for Pedestrian and Bicyclist Professionals (APBP) listserv for the last two weeks on what to do with an outside lane of 14 feet (without on-street parking), particularly when there is a seam between the asphalt pavement and the gutter pan. Several people encouraged the use of narrow, substandard bike lanes in an effort to get something on the street, rather than using sharrows in the wide lane, or just leaving the lane unmarked. I believe we need to be very careful to not create “bike lanes at any cost,” and to carefully consider the actual roadway conditions before specifying anything that does not meet or exceed standards. The diagrams below are from the NACTO Urban Bikeway Design Guide. The first shows a high quality bike lane adjacent to a curb; the second one shows sharrows rather than a bike lane where there is not sufficient roadways width. 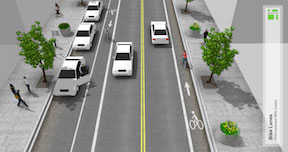 END_OF_DOCUMENT_TOKEN_TO_BE_REPLACED

The City of Sacramento is soliciting input on the North 12th Street Complete Street Project, the most significant portion of which would install a two-way cycletrack on the west side of 12th Street between the Hwy 160 bridge over the American River near Richards Blvd, and as far south as F Street.

The project should be compatible with and benefit from the Choice Neighborhoods Initiative Twin Rivers project which would revitalize the Twin Rivers Community Housing and the surrounding area. The January 2014 Final Transformation Plan is available from SHRA.  Though the plan does not go into great detail on streets and transportation, page 78 does provide a good overview of the changes and the relationship to 12th Street and other efforts in the River District and Railyards. In particular:

There is also a City of Sacramento project to add sidewalks to the east side of 12th St between B St and Richards Blvd.