I learned from a JUMP field staff how to deal with U-bars that won’t insert. Just move the rear wheel a bit, and it will go in. The U-bar is hitting the spokes, so rotating the rear wheel removes the block. This happens particularly with the charging rack, since with the front wheel locked into the rack, the rear wheel doesn’t move as much.

JUMP just changed their return to hub policy. Users will get a 25 cent credit for returning a bike to any hub, on that trip, and a dollar credit for returning to any charging hub. The email (graphics below) doesn’t make it clear if this applies to any drop zone hub, or only the charging hubs, but my experience yesterday and today is that it is for any drop zone hub (the green icon with lightning bolt). The credit I got for drop zone hubs was $1.25, both credits together. This could change. It could also vary depending on your membership type. I hope that this will encourage people to return bikes to hubs at the end of their trip. I often see bikes parked less than a half block from hub. Will 25 cents make a difference? Probably not, but it is a start. How about 50 cents, JUMP? In some other cities, there is a charge of $2 for leaving a bike outside a hub, in addition to the trip charge. I hope that we don’t need to go there in Sacramento.

I now have a student membership in JUMP Sac since I’m a student at American River College. At $30 a year, it is a great deal for anyone who uses JUMP regularly. You get 60 free minutes a day. Almost makes it worth being a student! An oddity is that taking a bike to a drop zone hub for credit counts against my daily minutes, until the daily minutes are used up, then the ride time is no longer charged. So it seems I get partial credit while I still have minutes, and full credit after I don’t have minutes remaining. I’m not sure I understand this structure, and I’m not sure it is consistent. 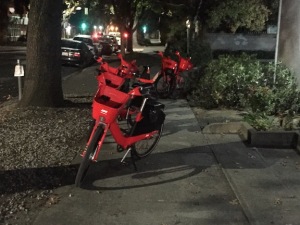 I, and everyone else, had hoped that bike parking would improve over time as people got used to the system, but parking seems to be getting worse rather than better. I’m not talking about parking in the buffer zone or to the side on wide sidewalks, which while technically illegal is practical where there are no bike racks, but parking in the sidewalk. This morning there were six bikes parked on and blocking the sidewalk on S Street. I don’t know why users would do this, as there was a sidewalk buffer immediately adjacent with plenty of space for bike parking (though nothing to lock to). Get it together people! There is no excuse for this kind of parking. It is both rude and hazardous for people walking, particularly if they have mobility issues and can’t go around. I moved the bikes. Yes, they are heavy.

I have been finding a lot of dead GPS bikes, with no display and no lights on the GPS unit. I’m not sure if this is common, or I’m just adept at finding them. If you find a bike like this, that does not wake up when buttons are pressed, please report it to support@jumpbikes.com. Sometimes they have lost track of these bikes, and sometimes they know the last location before the unit went dead, but it doesn’t hurt to report it. 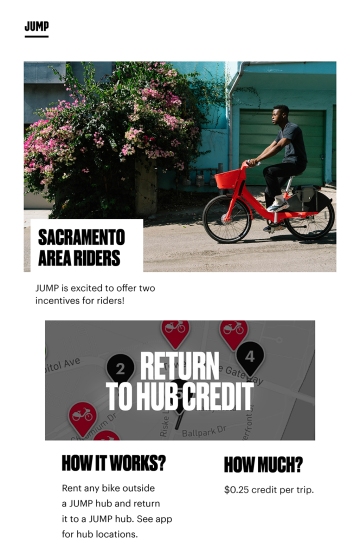 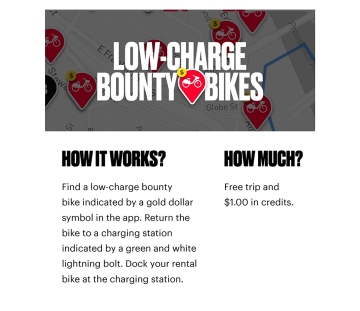