Today is the second day of the Tower Bridge Bike Share Preview. I took four trips yesterday, three from hub to hub, and one picking up an out-of-bike bike. And two early morning trips today, both to move out-of-hub bikes. These two bikes were parked at a rack at the other end of the block from the hub racks on R Street. Though I wasn’t there last night, I suspect that the hub racks were full of both bike share and private bikes, and the people could not leave the bikes in the hub. Full racks may be an issue at hubs close to drinking establishments, which 16th, 18th, Capitol, and R St all are. Once the system becomes more widespread, this problem may disappear. 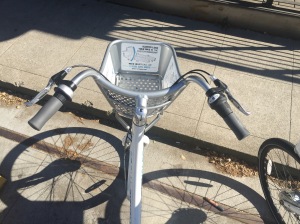 One of the things I do not like about these bikes is the handlebar configuration. They are sort of like beach cruiser bikes, with the angle along the side rather than the traditional handlebar angle. I hate this hand position. After 10 minutes of riding, my forearms were sore. I can put them in a more comfortable position, but only by taking my hands off the brakes. I see other bikes with this handlebar configuration, so I’m sure some people will love these. Not me!

The seat height is adjustable over a wide range, and the seat post has numbered marks so that once you find your comfortable seat height, you can immediately adjust each bike to your height.

The bikes have eight gears, in an internal hub. This is more than flat Sacramento needs, but nice to have. I find myself riding mostly in 6th, going down to 5th at intersections. 1st is very, very low. The bikes are heavy, so the low end gears will help less strong people get moving. Once the bikes are moving, the move along pretty well. They have rod drives rather than chains.

When picking up a bike on 18th Street last night, Steve Hansen was there doing an interview about the bike share system with a TV station. Maybe you saw it on the late news (I don’t have a TV). I talked a bit to Steve, but we both had other places to go. He is obviously pleased to have the new bike share in his council district. This hub was quite busy, and went from five bikes to zero bikes in a flash. I’ve been sort of watching the bike counts throughout the day. Some hubs seem to have a lot of turnover, going up and down frequently, while others don’t change much. This is just my observation, don’t know if the data backs that up.

As I mentioned, I returned three out-of-hub bikes to hubs, and got a credit of $1.50 for each. I have mixed feelings about this. I can imagine myself leaving a bike to go into inside, not sure how long it was going to take and therefore not wanting to put the bike on “hold” but still hoping it is there when I come out. On the other hand, these out-of-hub bikes might sit there for quite some time without being part of the circulation, which hurts availability. It had occurred to me, and Steve also mentioned it, “making a living” bringing these bikes back to hubs, and maybe accomplishing some rebalancing in the process. Of course it is just bike share credit, not real money, but my account balance it larger now than when I started.

The bike hub marker placed in the east end of Capitol Park, with a geofence covering the four square block area, is now gone. This may have been a programming error, or an experiment. After looking, I did not find any racks in the part of the park. However, I thought I saw a positive number in that hub mark during the day. Maybe my imagination.