bicycling in the east bay

This weekend I was in the east bay. I normally switch over from Amtrak to BART at Richmond, and from BART back to Amtrak at Richmond at the end of my trip, but this weekend I had a much less tight schedule, so decided to pedal my way around. From the station, I headed south to the waterfront, looking for the San Francisco Bay Trail. Many of the streets in Richmond are seriously deteriorated, just as is true in all of the east bay, but some have been renewed. I picked up the trail, which winds for quite some ways along the edge of the bay, sometimes far from the freeway and city and quite pleasant. At Golden Gate Fields, the racing stadium, the trail seemed to disappear, or at least I couldn’t find it. Today I found some good maps online that would have gotten me around this gap, but not having them, I reverted to surface streets. Since this was also the point at which I noticed that the slow tire leak had turned into a fast leak, I pulled out my phone and located a bike shop to get it fixed.

Blue Heron Bikes on Gilman in Berkeley is a Brompton dealer, and turned out to be the perfect place to go. I got the tube replaced, and then decided to get my other tire replaced, as it was two plus years old and had been punctured so many times I could see daylight through it. The work was done with professionalism. Better yet, I had great conversations with shop manager Jeremy and owner Rob, about Bromptons and all kinds of other biking. A couple was also in, waiting patiently for Jeremy to finish with my bike, one a Brompton owner and the other soon-to-be Brompton owner, and it was fun talking to them as well.

The shop is on the Ohlone Greenway, so I continued south on this path. For a ways it is underneath the BART tracks, but it veers away through a series of little parks, where is is narrow, root humped, and confusing, but then back into an area where it has been recently reconstructed. The new path is beautiful, wide concrete with a decomposed granite verge for runners, and landscaping. I eventually lost it again in Oakland, but continued south on good streets with bike boulevard markings and/or bike lanes to my destination, Cool Neon. Unfortunately, not open on weekends. I’ve been unable to find a good Ohlone Greenway map online, perhaps because it goes through several cities and doesn’t have a single administration.

I headed back north to Berkeley, finding bike boulevard streets much of the way. I parked my bike at the BikeStation so I could freely wander around downtown on crowded sidewalks and not have to find bike racks (which are often full). I found Asha Tea House and hung out there for a while, doing some work. I had a bowl of soup at Jazz Caffe, then went to the Solas concert at Freight & Salvage Coffeehouse. As much as I enjoy being on my bike, sometimes it is even more enjoyable to just wander freely on foot. Saturday night I stayed with my friend Michael in Oakland. 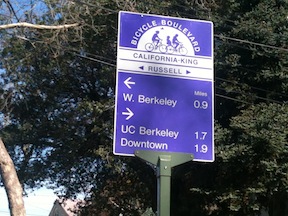 Sunday morning I had time before my train, so I rode back north to Richmond, via Berkeley. Through Oakland I rode Foothill, through downtown, and then Market into Berkeley. Sometimes bike lanes, sometimes not, but on a Sunday morning good riding with very little traffic. Crossing into Berkeley, I followed and took photos of the bike boulevards and signs (right, and in the Flickr link below). I had breakfast at The Sunny Side Cafe, and then continued north, finding the Ohlone Greenway again just northwest of downtown. Unfortunately much of the greenways through Albany and El Cerrito is under construction as BART does earthquake upgrades on the elevated tracks, so I was on and off the greenway and mostly using surface streets. I finally lost the trail at Interstate 80. There is apparently an extension to the west called the Richmond Greenway, which passes not to far from the BART/Amtrak station, but I didn’t know that at the time.

Berkeley has picked low traffic streets for the bike boulevards, and marked them well, both pavement and signs. There are even some wayfinding signs. 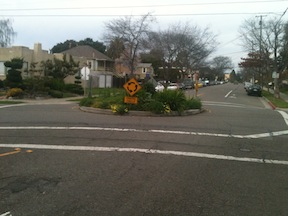 I think the bike boulevards work very well. As a vehicular cyclist, I don’t mind riding on higher traffic streets, but what a pleasure it is to just ride through neighborhoods. There are a number of traffic circles along these bike boulevards, with either two or four stop signs. I noticed that yield at stop is the common practice in Berkeley for bicyclists. What yield at stop means is to slow down, look for traffic, and proceed if they is no conflict, rather than stopping at a stop sign. The Idaho stop law. Motor vehicle drivers seem to understand and accept it, and I never saw a bicyclist blowing through stop signs without looking. On the other hand, on busier streets without bike boulevard markings, I saw bicyclists blowing both stop signs and signals. Something about traffic calmed streets also seems to calm behavior.

Enjoyable riding in the east bay. It is not a cyclist’s paradise, and in general the streets are in poorer condition that they are here in Sacramento, but their attention to special pathways and bike boulevards makes up for a lot. I will plan future trips with less time on BART and more time on bike.