Sacramento Press is sponsoring a live chat with Jeff Speck, the author of Walkable City: How Downtown Can Save America One Step At A Time. The live chat is tomorrow, January 3, at 12:30PM. The offline chat is already going on, if you want to check it out. I am currently reading the book, in the Kindle version, but am only part way through.

Many of the online comments so far have focused on creating a livable city, and it is wonderful to see so many positive ideas and accurate identification of challenges. Intelligent conversation like this is rare in the Sacramento news blogs. I’ll make some comments specifically on the walkability safety aspects. I’ve written about this before, but it is worth writing about again and again, because the problems still exist.

Traffic sewers: Multiple lane and one way streets are traffic sewers. This epithet is used to describe streets designed to flush traffic in and out of employment centers (and to homes in the suburbs) twice a day. They serve no other reasonable purpose, and they make a place very much less walkable. Three (or more) lane roadways are incompatible with walkability. They encourage high speed traffic, and provide too long a crossing distance to pedestrians to be comfortable with. They don’t meet the “8-80” criteria, of being safe and comfortable for people of all ages.Solutions:

If these two ideas were implemented, it would be inconvenient for the state and other workers to get to and from downtown every day. That is exactly my purpose. I want it to be expensive and inconvenient to lead the lifestyle that lives in the suburbs and works downtown. If it is expensive and inconvenient, they will consider two ideas that they currently needn’t consider: living closer to where they work, and using public transportation. They will no doubt complain that they are being treated unfairly, and that this is social engineering, but remember that the very existence of the suburbs is a huge act of social engineering, and was made possible by the (continuing) diversion of tax revenues from urban areas to suburban areas.

Speed: Speed kills. Simple as that. The graph below shows why. Solution:

1. Lower speed limits to 20 mph in residential and business districts. Lower speed limits to to 30 mph in other urban and suburban areas. Again, there will be complaints that this is unfair to people who work downtown, and to people who live in the suburbs. What I find unfair is that pedestrians (and bicyclists) have to risk their lives simply to live in the place where they live. 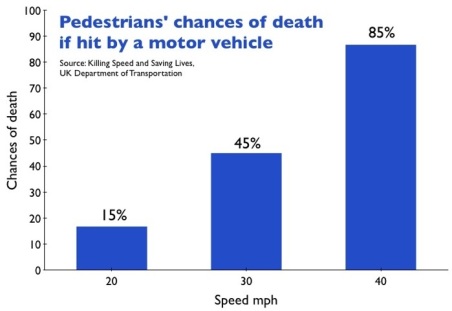 Crosswalk safety: It is not safe to cross roadways in Sacramento. It varies from somewhat unsafe in the central city (downtown, midtown, and some of east Sacramento) to “taking your life in your hands” unsafe in the remainder of Sacramento. If it isn’t safe, or doesn’t feel safe, people won’t walk. Part of the reason is high speed traffic, which is addressed in the two sections above.

The main reason is failure to yield. The law states (CVC 21950): The driver of a vehicle shall yield the right-of-way to a pedestrian crossing the roadway within any marked crosswalk or within any unmarked crosswalk at an intersection, except as otherwise provided in this chapter. But this rarely happens. During my brief time in Sacramento, this has actually gotten worse rather than better. When I first came, many motor vehicle drivers yielded, but now very few do. More do in the central city, almost none in the suburbs. Solutions:

If all of the ideas above were implemented, we could nearly eliminate pedestrian (and bicyclist) fatalities, and greatly reduce injuries. That would be a great contribution to a walkable city.