The Tower Bridge Preview bike share is going to have some expansion in about a month, up to five new hubs on the Sacramento side. I had heard previously that there would be no expansion before full roll-out, which is no sooner than November and quite possibly far beyond that since a major corporate sponsor […]

The Tower Bridge Bike Share Preview has been operating in Sacramento central city and part of West Sacramento for two months now. I have been using it from time to time, and have some experiences to share.  These SoBi (Social Bicycles) bikes are a combination of hub bikes and park-anywhere bikes. If you return a […] 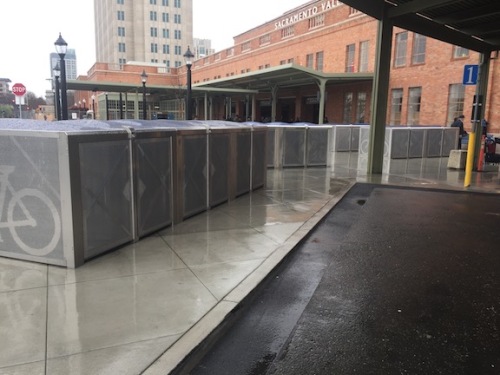 Forty on-demand bike lockers have been installed at Sacramento Valley Station by Capitol Corridor. They are located between the station exit to the platforms and the thruway bus area. These lockers use the BikeLink chip-card system, which I wrote about in 2013 (BikeLink). These join long-term lockers and the Pedal Stop bike station, and new lockers […]

The Sac Grid 2.0 plan is a good one which I mostly support, but I have had, and do, and will have, some suggestions that I think would improved it. Access to and from the Sacramento Valley Station (Amtrak) is of critical importance for walkers, bicyclists, and transit users. Bicycling and walking are handicapped by the one-way […]

With this post, I’ve added a new category to my blog: re-gridding Sacramento. I’ll have more to say about that category, and many more posts, in the near future.

Let’s say one was driving and wanted to leave the Sacramento Valley Station (Amtrak and Capitol Corridor) to head southbound or eastbound. Tough luck. The exit at the east end of the parking lot forces you to turn right, to the south, onto 5th Street. I often see people turning across the double yellow line to go northbound on 5th Street, and to be honest, I don’t blame them, because this is the logical though illegal way to go south or east.