I’ve only lived in midtown a while, but from the first it was clear to me that here was a walker and bicyclist paradise, at least in comparison to where I’d lived before, Carson City, and where I work, Citrus Heights. It still seems a bicyclist paradise to me, but I’m seeing the dark side for pedestrians. This may be a recent development, or perhaps I’ve just become more aware of the reality. Though I bike more than I walk, I’m certainly a pedestrian too, and there are a large number of pedestrians in midtown.

Many drivers in midtown are aggressive towards pedestrians. At times I think this is mostly commuters who live elsewhere and just work here, but at times I’m sure it includes the people who live here as well. Driver behavior I see on a daily basis: 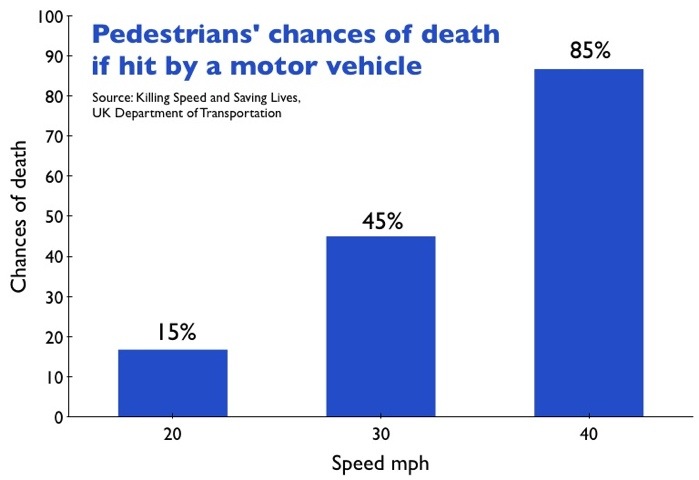 As to why speeding is important, see the graph at right. A familiarity with this graph should be a requirement for obtaining and retaining a drivers license. At the posted speed limit of 25 mph, the chances of death when a pedestrian is hit is about 30%. At the usual speed on one-way streets of 35 mph, the chances jump to about 65%. I don’t call this an accident, or even a crash, I call it murder with a deadly weapon. Why someone thinks that getting to work on time, or home as fast as possible, is worth someone else’s life, is beyond my understanding.

I regularly see drivers slow after entering the crosswalk, or after crossing a sidewalk out of a driveway, only stopping if they sense an impending collision with another motor vehicle. They don’t look for or really even consider the possibility of pedestrians.

I see drivers blowing through crosswalks while pedestrians are still in them, often coming so close as to express an intent to intimidate. This is a violation of California Vehicle Code (CVC) 21950(a).

I see drivers failing to stop when another vehicle stops for a pedestrian, particularly on one-way streets. This is a violation of CVC 21951. This is known in pedestrian safety circles as the multi-lane threat, and it is a major cause of pedestrian fatalities.

The behavior that I see most often, not a violation of the law, is that drivers will simply not stop or yield to a pedestrian waiting to cross, particularly on one-way streets. Between my apartment and my most frequented coffee shop is a one way street, N Street, eastbound. When drivers are leaving their downtown jobs to head home, there is a continuous stream of traffic, and I’ve seen people having to wait as much as five minutes to cross. No one stops. Not even if the person is disabled. Not even if the person steps off the sidewalk to more clearly signal their intent and need to cross. The irony of this is that some of these people were pedestrians a few minutes before, on the way from their office to their parked car.

This is all sociopathic behavior and I think we need to call it as such.

This is not unique to Sacramento, it is pervasive in the United States, and an indication of our national driving addiction. But what is most worrisome for me is that it seems to be getting worse rather than better. Midtown is no longer a walker’s paradise, if it ever was.

Solutions? Enforce the laws, and get rid of the one-way streets. I’ll have more to say on those topics in the future.