I’ve now had time to look at Sacramento’s 2010 Transportation Programming Guide in more detail. What I’ve seen convinces me that updating the project list without revisiting the ranking criteria would be a huge mistake. The ranking criteria represent at 1970s view of transportation planning, with a little 2000s language thrown in. It will not lead to a modern transportation system that welcomes all transportation modes, but to the same system that got us in the fix we are already in. What fix? That we spend huge amounts of money to reduce congestion and increase mobility, which is the ability of people to drive long distances at high speeds. In contrast, we spend very little on accessibility, which is the ability of people to get to services they need, including but not limited to employment. As mobility goes up, accessibility goes down, because we allow everything to spread out, and then have to build wide, high-speed arterials and freeways between these far-flung places. 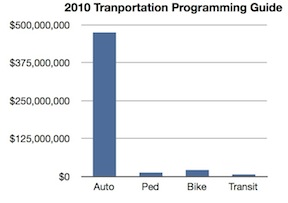 The chart at right shows the allocation to auto, walking, bicycling, and transit. It is based on the standard that sidewalks add about 3% to the cost of transportation project, and bicycle lanes add about 5%. Reading the project descriptions of the top 20 projects (out of 42 projects), I assigned a percent to ped and bike, and then calculated the project cost. I was pretty liberal, increasing the percentage for projects that actually had some purpose beside widening or extending streets, and only decreasing it when the project didn’t have any significant ped or bike component at all. Transit is even worse. The TPG doesn’t really even address transit, though it should. Transit is usually the best solution to congestion problems, yet it is never identified in the TPG as a solution. And in fact roadway projects can have a negative impact on transit when they clog areas that buses need to move freely, and place cars on top of light rail tracks.

Sacramento is updating its Transportation Programming Guide, and has sought public input on projects. A survey (deadline April 15) seeks input on specific improvements at specific locations, but it does not seek input on the overall approach of the guide. The 2010 guide is available for review. Since the survey did not allow me to comment on the overall plan, I submitted some comments, below. I could have said a lot more about each of these, but only have time for this at the moment.