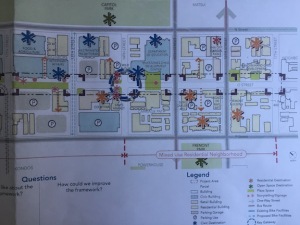 CADA (Capital Area Development Authority) is undertaking a process to activate O Street between 7th and 17th streets in downtown and midtown Sacramento. There was a community meeting at noon today, which I participated in. Not many people there, but there is also a meeting this evening which might gather residents who work during the day.

There are a lot of intriguing ideas and overall I think the draft framework is a good one. CADA said the diagrams and maps would be posted within a few days, so you will be able to see them at http://www.cadanet.org/projects/o-street-improvements-project.

Some comments I made:

The big issue, though, is that there is insufficient residents along the corridor, specifically between N Street and Q Street, to activate the corridor. More about that in my next post.

The improvements to O Street will be very expensive, if all are completed, but there are low cost items to start with, and I’m hopeful about seeing some of these in the near future.