This one is pretty simple, but of utmost importance. Speed kills, but the increasing share of fatalities is walkers. The chart explains why.

Though the primary beneficiaries are walkers, bicyclists and motor vehicle drivers will benefit as well. As with many policies and actions related to walking, this is an interim measure to keep people alive until roadways are redesigned. Roadways design should enforce a desired speed, not allow and encourage a higher speed. 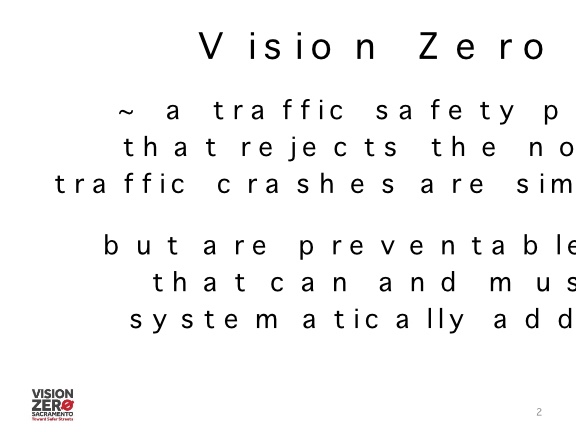 I attended the community meeting hosted last evening by Jay Schenirer, Steve Hansen, and the school district, called as the result of the recent fatality and severe life-threatening injury on Freeport Blvd. I’ll write more soon about the meeting itself, but for today, a comment about use of the ‘A’ word, accident. Every public official that evening, with the exception of Jennifer Donlon Wyant, used the word accident. Some of them repeatedly, with Ryan Moore, the Interim City Traffic Engineer, being the worst offender. Many of these uses were made while standing in front of the Vision Zero slide that states “Vision Zero ~ a traffic safety philosophy that rejects the notion that traffic crashes are simply “accidents,” but are preventable incidents that can and must be systematically addressed.” Oh, the irony.

Not the time to go into a detailed explanation of the harm that using this word causes, but you can check out http://droptheaword.blogspot.com, or #CrashNotAccident on Twitter. Basically, the common understanding of the word in traffic violence conversations is to excuse motor vehicle drivers (and engineers) of responsibility for their actions, implying that nothing could have been done, when in fact many things could have been done.

So, a modest proposal. Every time a public official uses the ‘A’ word, they make a contribution of $20 to a local transportation advocacy organization. Eventually, people will cure themselves of using the word, but in the meanwhile it will be an important source of income for nonprofits working to overcome the bias inherent in use of the word, and the underlying windshield perspective that accepts traffic violence as inevitable.

I just ran across an interesting piece of data that I was not aware of before, in Motor Vehicle Crash Deaths in Metropolitan Areas — United States, 2009. Sacramento area ranks 8.3/100,100 for motor vehicle related crash deaths, but 14.4 for the city, which is in the middle of pack for the US, but worse than most of California. Riverside area is 10.6 and city 11.9, San Diego area 7.8 and city 5.6, San Francisco area 5.6 and SF 4.0 and Oakland 5.0, Los Angeles area 6.6 and Los Angeles city 7.7 and Long Beach 6.1 and Anaheim 7.8. This 2009 data, and I could not find anything from CDC more recent. For contrast, London is 1.6 and New York is 3.2, both considered dangerous places in the mis-informed public mind.
The Keys to Designing Cities With Fewer Traffic Fatalities (CityLab 2015-07-23)

Courtesy of Families for Safe Streets, Transportation Alternatives and the Vision Zero movement in New York City, there is a new effort and pledge to stop using the incorrect word “” for crashes involving vehicles, at Crash Not Accident. Though this is an effort that has been going on locally and nationally for some while (see We Save Live’s Drop the “A” Word). In the Sacramento region, the two most egregious users of the incorrect term are @SacRegion511 and law enforcement officers.

I ask all of you to join this effort. Every time you hear the word accident used when people are talking about vehicle crashes, correct them. Every time you see something on the Internet that uses the wrong word, comment. Yes, those people who prefer to absolve motor vehicle drivers of fault and consequence will not be happy. They may unfriend or unfollow you, and they will reply with angry requests to consider the poor “victim,” the motor vehicle driver, who will be scarred for life. In my opinion, scarring for life is a tiny price to pay for taking someone else’s life with irresponsible use of a motor vehicle. Am I angry? You bet I’m angry! 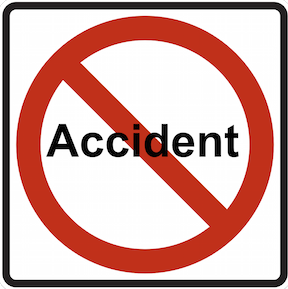 I don’t know whether the term accident has a new-found popularity, or whether I’m just more sensitive to it the last week, but it seems like everywhere I look in the news media, there it is, the term accident. I’m talking here about use for motor vehicles, bicycles, and pedestrians.

The term accident implies that no one was at fault, it just happened, an act of nature. But nothing that occurs on the roadways is an accident. Someone caused it, or someone contributed to it.

#NotAnAccident (yes, I realize that this twitter tag gets used for other things, but I haven’t thought of a better one)

I have been using the term crash in place of accident for several years. However, several people have commented that crash may be more appropriate to a single user situation, as in, the car crashed into a tree, or the bicyclist crashed on slippery pavement. The word collision implies two or more users, as in, a collision between a motor vehicle and a bicycle or pedestrian. But I’m not yet entirely happy with those definitions either. Incident has also been suggested, but that seems to clinical to me, almost a valueless opposite of accident.

Here are some links:

I stumbled across a twitter feed about a week ago, and it is filling up my twitter timeline, by far the busiest thing I follow. It is Sac Traffic, which is a CHP feed of traffic alerts in the Sacramento region, at @sactraffic.

As a bicycle rider and walker I’m hyper aware of the risk out on the roadway, and assumed there were more incidents than I was aware of, but I had no idea there were so many in the Sacramento region. I follow the Sacto911 blog on the SacBee for the purpose of tracking carnage to pedestrians and bicyclists. It includes traffic and other crime, but it generally only has a few to no incidents per day. I’ve long suspected there were more, but never had any solid information.

It is basically a game of bumper cars out there!

END_OF_DOCUMENT_TOKEN_TO_BE_REPLACED

In the last there days, Monday through Wednesday, at least four people died when struck by car drivers, and two others were injured. I know that the Sacramento Bee does not report all pedestrian and bicyclist fatalities and injuries, so there may have been more in the region, but this is an incredible level of slaughter.

The SacBee articles so far are:

The better of these articles describe the outcome and location in a factual manner. The poorer ones place the blame on the victim. This victim blaming is aided and abetted by the law enforcement officers who make the assumption that either a) it was a “tragic accident” that could not have been prevented or b) the driver was not drunk and remained at the scene, so clearly it is the pedestrian or bicyclist’s fault. Both are nonsensical statements and ideas.