I live within the influence/taxation zone for the proposed Sacramento Streetcar, Sacramento Measure B, so I received a voter information pamphlet, and presumably will receive a ballot within a few days. Let me say right up front that I am voting yes. I support the streetcar for its economic and transportation benefits. However, I’d like to address some of the anti arguments. 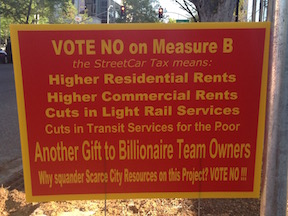 The pro side is well represented at http://gosacstreetcar.com, and the other websites linked from there. I have not found a website for the anti side, but their arguments are in the information packet and on the sign above.

Here are the anti arguments, from the pamphlet, with my comments in green:

END_OF_DOCUMENT_TOKEN_TO_BE_REPLACED

Today I walked the route of the proposed Sacramento Riverfront Streetcar. No, this is not part of the argument about whether pedestrians or streetcars are faster, going around the Internet recently, but I just wanted to see it all from a walking viewpoint, not on my bicycle. There is a map of the probable route on the website above, though oddly it leaves out some streets.

I picked up the route at L and 16th, just two blocks from my home, and headed west between Capitol Park and the brutalist Community Center Theater. The route turns north on 13th Street and apparently goes through the pedestrian plaza over to 12th where is would then use the SacRT light rail tracks (light rail would be routed to the north along H Street). The further west on K Street, the more depressing things are, with most buildings not only empty but abandoned. But, this is part of the reason for the streetcar, to support the economic redevelopment of this area. At 6th it heads north along the existing light rail tracks to H, and then west to Sacramento Valley Station (Amtrak).